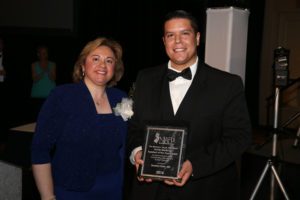 Named in honor of the late Michael Doyle, MD, a prominent family physician and past NJAFP president who was active advocate for family medicine on state and national levels, the award is presented to one outstanding medical resident in the state who best exemplifies the tradition of the family practice resident by working effectively as a team physician, showing support to co-residents, being respected by peers and educators, and demonstrating leadership.

Because of Dr. Khan’s excellence in professionalism, patient care, communication, teaching and leadership, he was selected by faculty each year of his residency to receive the Residency’s highest award for the class.  As an intern, he won the Diplomat Award in recognition of his representation as an ambassador of Family Medicine throughout the hospital. He was also selected to receive the CARE Award, given to a second year resident who has shown exceptional commitment to pursuing the principles of Community involvement, Advocacy, Responsibility and Enthusiasm. Most recently, in his final year of residency, Dr. Khan was a nominee for the STFM Teaching Award, the Patient Service Award and the Kenneth W. Faistl Future of Family Medicine Award, as a testament to the superiority he has demonstrated in his teaching, patient care and potential for future contributions to medicine.

Nominators say Dr. Kahn demonstrates excellence in his performance as a family resident physician and has a life-long commitment to serving the families of New Jersey. Immediately after graduation, Dr. Khan began a one-year Geriatric Fellowship at Rutgers CentraState. His plans then are to join a family medicine practice in New Jersey with the opportunity to continue teaching.