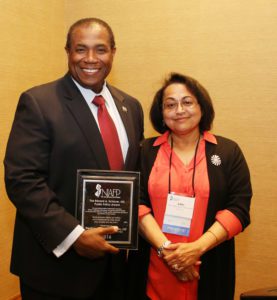 Trenton, N.J. – The New Jersey Academy of Family Physicians (NJAFP), the largest primary care medical specialty society in the state, recently presented Assemblyman Herb Conaway with the Edward A. Schauer, MD Public Policy Award for his significant efforts to use public policy to advance opportunities for access to comprehensive health care and promote high quality standards for family physicians who are providing health care to the public.

Established in 2003, the Edward A. Schauer, MD Public Policy Award recognizes exemplary advocates for family physicians. Named for the longtime family physician from Farmingdale who was active in his community through as a private and school physician and as an active public servant, the award is presented to an individual who has promoted constructive engagement between family medicine advocates and governmental leaders for the purpose of delivering high quality healthcare services.

Assemblyman Conaway is the only member of the New Jersey Legislature with both a medical and a law degree, providing him with a unique perspective and understanding on the practical impact of health care policy on patients in every day situations. He was recently elected to a 10th term representing the Seventh Legislative District in New Jersey’s General Assembly where he serves as the Chairman of the Health and Human Services Committee, Vice Chairman of the State and Local Government Committee, and member of the Appropriations Committee.

A Burlington County native, Assemblyman Conaway earned a bachelor’s degree in politics from Princeton University, a medical degree at Jefferson Medical College in Philadelphia, and a law degree from Rutgers Law School in Camden.  After graduating medical school, the Assemblyman served as a United States Air Force Captain, a general medical officer and an assistant director of the Primary Care Clinic at McGuire Air Force Base. Currently, he practices internal medicine in Trenton.